Taping It To The Top 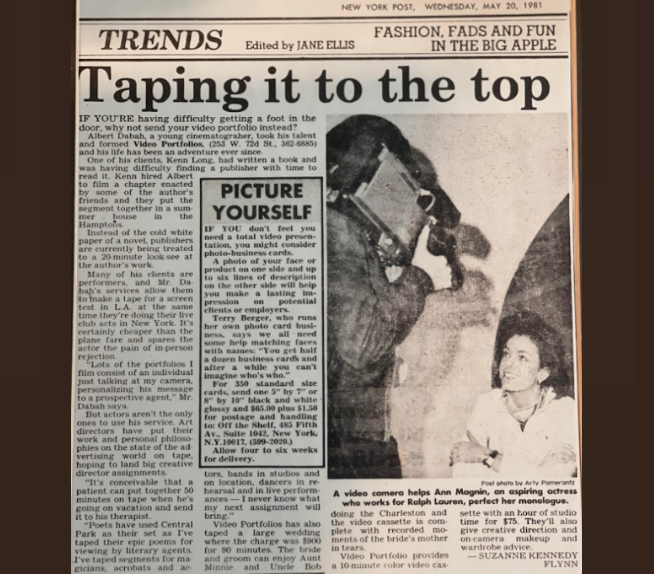 If you’re having difficulty getting a foot in the door, why not send your video portfolio instead?

Albert Dabah, a young cinematographer, took his talent and formed Video Portfolios and his life has been an adventure ever since.

One of his clients, Kenn Long, had written a book and was having difficulty finding a publisher with time to read it. Kenn hired Albert to film a chapter enacted by some of the author’s friends and they put the segment together in a summer house in the Hamptons.

Instead of the cold white paper of a novel, publishers are currently being treated to a 20-minute look-see at the author’s work.

Many of his clients are performers and Mr. Dabah’s services allow them to make a tape for a screen test in L.A. at the same time they’re doing live club acts in New York. It’s certainly cheaper than the plane fare and spares the actor the pain of in-person rejection.

“Lots of the portfolios I film consist of an individual just talking at my camera, personalizing his message to a prospective agent.” Mr Dabah says.

But actors aren’t the only ones to use his service. Art directors have put their work and personal philosophies on the state of the advertising world on tape, hoping to land big creative director assignments.

“Poets have used Central Park as their set as I’ve taped their epic poems for viewing by literary agents. I’ve taped segments for magicians, acrobats and actors, bands in studios and on location, dancers in rehearsal and in live performances – I never know what my next assignment will bring.”

Video Portfolios has also taped a large wedding where the charge was $900 for 90 minutes. The bride and groom can enjoy Aunt Minnie and Uncle Bob doing the Charleston and video cassette is complete with recorded moments of the bride’s mother in tears.

Video Portfolio provides a 10-minute color video cassette with an hour of studio time for $75. They’ll also give creative direction and on-camera makeup and wardrobe advice.